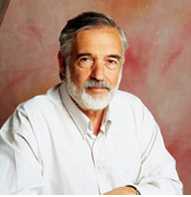 Noam Lemelshtrich Latar is the Founding Dean of the School of Communications at IDC Herzliya (Israel's first private university), which has been the site of pioneering experiments in employing cutting-edge communications technologies to synergize art, virtual reality, and conflict resolution. He served as the Chairperson of the Israeli Communications Association (ISCA) from 2009 to 2012. He received a Ph.D. in Communications from MIT in 1974, M.Sc. from Stanford University in engineering systems in 1971, and a BSc in Mechanical engineering from California State University Northridge (Summa cum Laude). He was among the founders of the Community Dialogue Project at MIT, experimenting with interactive communications involving communities through electronic means. NLL pioneered the papers on touch-screen feedback for interactive TV, on new media and cybernetic decision making, on digital identities (Social DNA), and on Artificial Intelligence robotics in journalism. Lemelshtrich Latar initiated the teaching and research of new media at the Hebrew University of Jerusalem and at Tel Aviv University, and was involved in the Israeli high-tech industry, establishing several communications startups in cognitive enhancement that employ computer algorithms and data mining for the creation of digital consumer profiles. Lemelshtrich Latar is the Chair of the Daniel Pearl International Journalism Institute. His current research interests are the effects of artificial intelligence on media and journalism and the potential of art to create dialogue